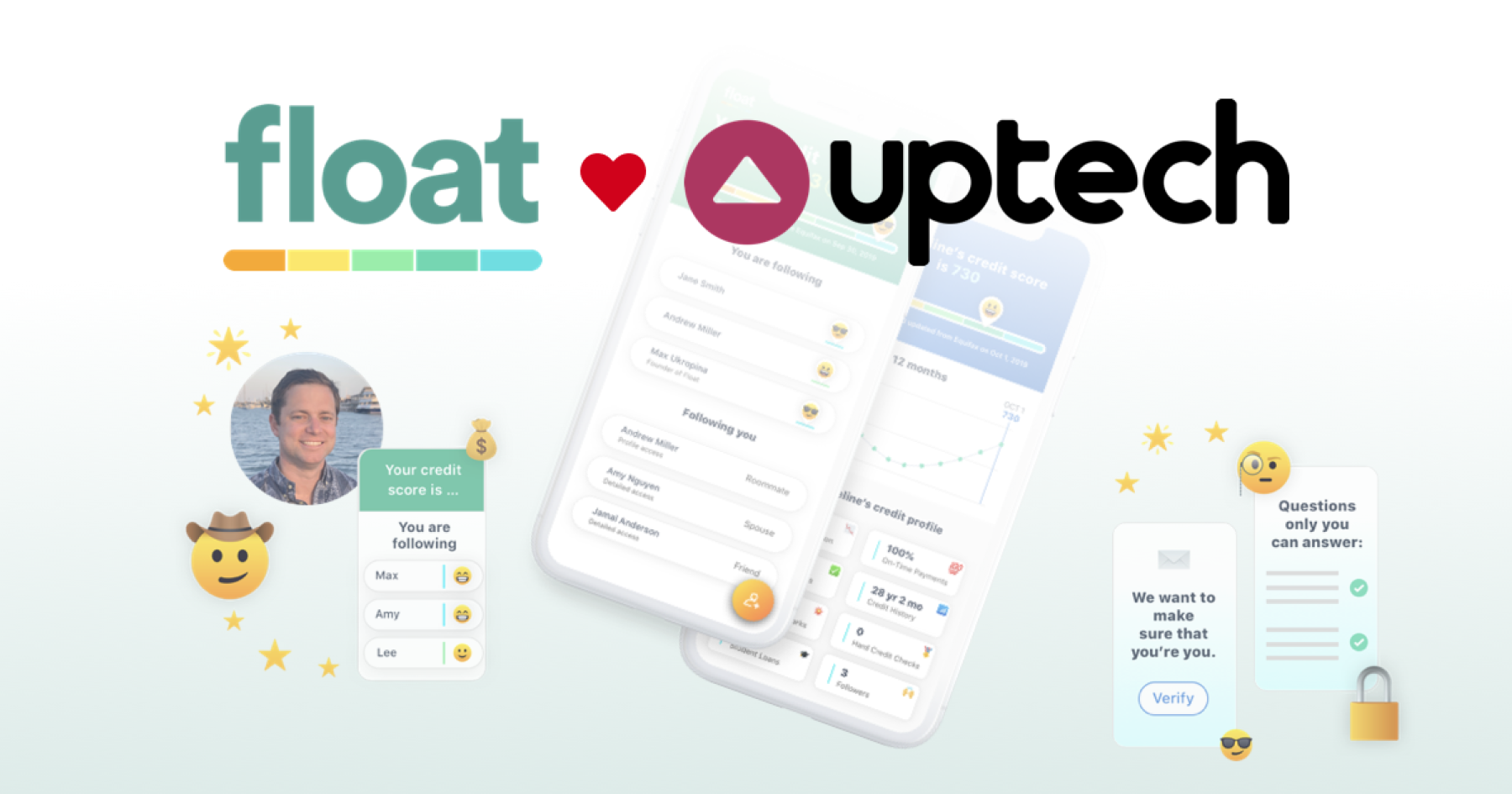 Float is an emerging fintech startup headed by Max Ukropina, aiming to revolutionize how people can view, monitor, and share their credit scores. The app, available on iOS and Android devices, lets users track their VantageScore credit score, but it also gives them total control over how they share that information with others.

From a development standpoint, this required the app, like any other financial app, to include basic safety features and the infrastructure to support security at every step of the application usage process. Along with built-in security and analytics, features were needed to allow users to select from three different levels of access when deciding what to share with other users.

From a business standpoint, it required that we develop the app with built-in analytics so that Float would be able to not only monitor usage but also make adjustments according to the data to scale the business over time sustainably.

When Max first approached our team at Uptech Studio, he had a few mock-ups in hand and a great concept. However, he lacked the people needed to take his idea to the next level. That’s where we came in with our team of individuals with unique backgrounds and expertise.

“I've been able to have an expert whenever I've needed it. If I needed to scale up UX, work on the back-end, or tweak the front-end, I could get that help. It’s clear from the start that the Uptech Studio team has a lot of experience, and their expertise is something I couldn't get anywhere else. The work they did on Float was far beyond what I would have gotten if I had just hired one full-time developer."

After the initial meeting to share ideas and goals, our team began building a proof of concept app on iOS that demonstrated that Float was more than just an idea and technically feasible. Max then used this proof of concept to raise additional seed capital needed to continue further development.

Following a round of funding, we shifted the focus (and the team) to build and launch MVP versions of the app for iOS and Android while refining the design and analyzing usage data to make Float more than just an MVP, but a compelling product that was ready to enter the market. This included a variety of our standard services, including working closely with Max on product strategy, user experience, visual design, and email design and setup in Intercom.

As Max will tell you, this part of the process was perhaps one of the most beneficial for Float. “When you're starting your own company, you're investing your own money, sweat, and tears into something. Being able to happily work with a group like the folks at Uptech Studio to build your project in a scalable way is special.”

"I knew that I was going to get a phenomenal product that not only worked but that I’d be proud of, too."

We identified two main issues during the initial development process with the original mock-ups that Max had brought in. The first was that the app lacked a few key features to be a viable product. While he had aesthetically-pleasing sketches, they had a few holes in the user experience.

The second problem was that there were no existing plans to incorporate analytics into the app’s framework. In terms of long-term growth, this posed issues with scalability and meant that it would be hard for Float to measure users’ value in a way that would allow Max to scale his business successfully.

Max admits that there were flaws with his initial mockups and that the Uptech Studio team helped him identify those and make necessary changes. “They told me ‘no’ when my idea wasn’t going to be functional, then guided me through changes that would work, and I appreciated that.”

"The team at Uptech Studio has enough experience to know what works."

“Whether that’s from product fit to the back-end, they know what works and infuse that expertise into everything they do.”

The first part of the solution was to address functionality and ease of use. Our team helped take Max’s initial concepts and weave them into a functional app that was useful, approachable, and easily understandable for users to navigate.

Then, we worked to incorporate analytics using Branch and Amplitude, which has allowed Float to track the value of customers from day one. By having those analytics tools in place, Max can identify which ad channels lead to the highest conversions and draw in the best customers based on the key actions they take while using the app.

Amplitude Analytics, on the other hand, allows Max to dive deep into the user journey. This means he’s able to use filters and segmentation at various funnel steps to obtain an overview of the user flow. Using those analytics, he can view all of the events and actions completed by a user during each session.

Some of the benefits of these analytics as they specifically relate to the Float app include:

For Max, this was invaluable. “I can measure in-app activity,” he says, “and see where people are in the funnel. I know exactly what kind of customer is coming in and who is valuable in the end. Having the tools that they’ve built to measure that is extremely valuable to me at this stage of the product launch.”

Where did these unique solutions get Max and Float? Float won the 2020 SoCal Startup Day event, Southern California’s largest startup and investor event with over 800 attendees and hundreds of investors.

After building the app from scratch for iOS and Android, we were able to ramp up and down on active development as Float advanced through various funding stages, offering everything he needed when he needed it. Max was able to use the proof of concept app to secure financing and then used the full version of the app to launch the product.

Today, Max is taking advantage of the built-in analytics to create targeted campaigns that attract high-quality, long-term users he needs to scale the app. This allows him to invest his time and money where it’s better-suited, resulting in reduced marketing and acquisition costs.

As for Max, he remains an Uptech Studio convert. “Their honesty and care are truly some of their best qualities. The way they treated me is how I’d like other startups and small businesses to be treated.”

We make great products
Looking for a partner to help you create a successful business and amazing software products? Get in touch with Uptech Studio today.
Get Started